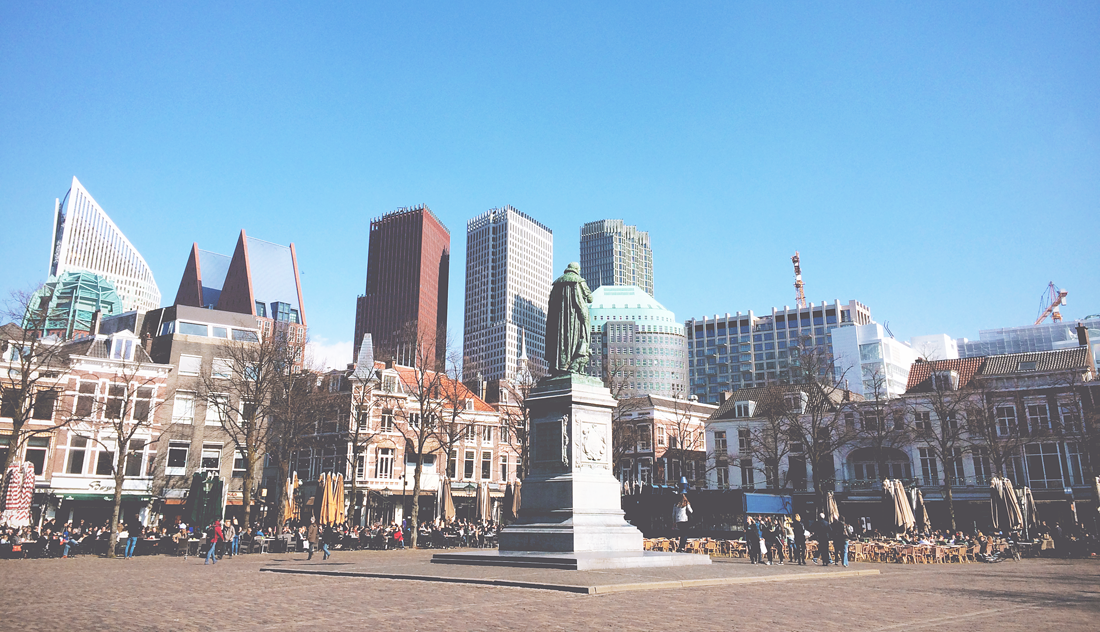 Often The Hague is also called the political capital of the Netherlands. So it’s not uncommon to encounter a member of the parliament at the ‘Binnenhof’. But The Hague has a lot more to offer. Visit ‘t Plein’ with lots of cosy bars, admire Vermeer’s paintings at the Mauritshuis, or have a canal cruise.

In The Hague we offer the following standard tours:

Tour Royal The Hague
On this visit we will take a tour passed the different palaces and government buildings. You will enter the worldfamous Panorama Mesdag. The official name of the residence is Earl's Court. The city was formed around the current Inner Court where the government buildings are. The Hague, the third city of The Netherlands, has a rich history and a great diversity of old and modern architecture. During your tour through The Hague you will meet all the different facets of the city.

You will visit different museums, like the Mauritshuis, Palace Lange Voorhout, Panorama Mesdag and the City Museum. In the Mauritshuis you will find a magnificent collection of paintings from masters like Rembrandt en Vermeer. Palace Lange Voorhout holds the Escher museum, while Panorama Mesdag is house to the largest circular painting of the world painted in 1881. In the City museum of architect Berlage you can view modern art by artists like Mondriaan.

You will see Palace Noordeinde, the workpalace of King Willem Alexander. The embassy district receives a visit with the different residences and embassies in the city. Near here is the Peace Palace, the home of international law. The Hague is also the city in which more then 70 international organisations and multi-nationals reside. Finally Scheveningen gives you the harbor and the beach as shown on the painting by Mesdag.

Culture and History The Hague
The Hague is a city with a long history and many different cultures. This tour brings this culture and history alive through the palaces and cultural heritage of the city. We visit the Gemeentemuseum the Hague for a guided tour. Here you will have time for coffee, thee or soft drinks.

City of Peace and Law
The Hague is the international city of peace and law. The city is filled with symbols that reference the shapes of law. This tour takes you to the different institutes of peace and law. During the tour you will visit the magnificent Peace Palace.

From the first official verdict in the Ridderzaal, with immediate excecution of the sentence, we take you passed the High Council, the House of Democracy, the House of Law, the International Criminal Court, the Dutch Criminal Court and of course the Peace Palace. All aspects of peace and law come to life.

The Hague is a city with its own character and large diversity of architecture styles from the 12th century till now. From the centre we ride through several neighborhoods of The Hague to view these styles. We'll take a break during the tour for coffee, tea or soft drinks.

The city developed around the Great or Saint Jacobs Church and the Cloister Church. You will see examples of Gothic (circa 1140-1500) and Renaissance (circa 1300-1500) styles. These are followed by Jugendstil/Art Nouveau (circa 1890-1914) and Art Deco (circa 1920-1939). In conclusion we'll show you examples of the Chaletstyle and modern architecture by famous architects like Graves and Koolhaas.

According to your wishes we can also customize a program. Below you can find a selection of what The Hague can offer.

We can arrange full package tours. Our professional guides will tell you enthusiastically about the cities, the sights, the culture and fun facts. Our guides speak several languages including English, German, Spanish, Italian and Russian.

Did you know that the government of The Netherlands is not located in its capital city, Amsterdam? As a matter of fact, the Dutch government houses in the royal city of The Hague. This historic city once formed the heart of the Low Lands and today is still a very important city that is waiting to be discovered! 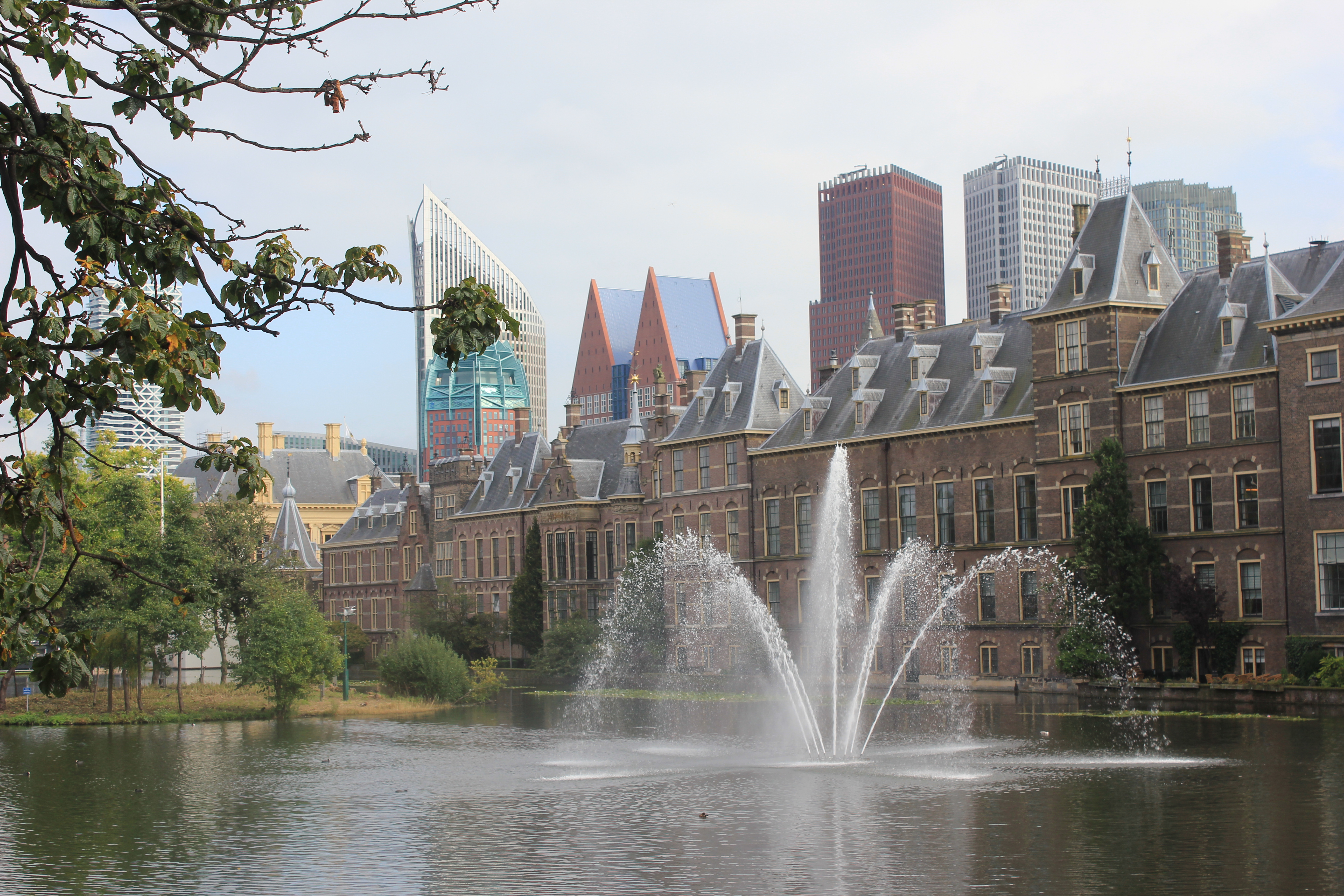 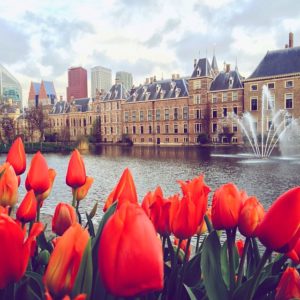 The Hague – royals and government

The city of The Hague is the 3rd largest city in The Netherlands and has a long political and regal history. This is where the Dutch houses of parliament are located which you can see from up close at the ‘Binnenhof’. A truly stunning building with a center court and on the side of a pond called the ‘Hofvijver’. Apart from the Dutch government, The Hague is also the home of royalty. It is here at the ‘Noordeinde’ Palace where King Willem Alexander has his working palace. His house is just outside of the city.

In The Hague you will find many historic buildings, shops and parks that have a reference to either the government or the Royal Family. Want to get regal yourself? Hop on over to Noordeinde Street and surrounding streets to shop at boutique shops with the royal sigil.

Sightseeing in The Hague

The Hague is the 3rd largest city in The Netherlands yet very compact and can be discovered in 1 or 2 days. Some definite must-visits are: Binnenhof + Hofvijver, Lange Voorhout, Noordeinde Palace and the Peace Palace. 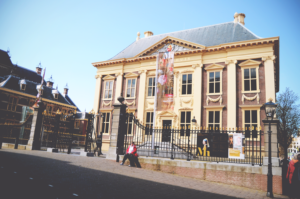 The Hague has a rich, cultural history and houses many museums. Ranging from the world-renowned ‘Mauritshuis’ with paintings by Dutch masters such as ‘The Girl with the Pearl Earring’ by Vermeer, to the mind-boggling works of Escher at the ‘Escher Museum’. From the cruel history of life in prison in the 16th Century at ‘De Gevangenpoort’ to famous photographs in the ‘Museum of Photography, The Hague is home to many types of museums. 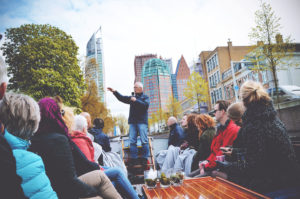 The Hague is often called a ‘city of contrasts’ not in the least place because of the rich diversity in architecture. While the city flourished during the Middle Ages, today it’s growing faster than ever. This has resulted in a very interesting ‘skyline’ that holds a mix of both historic and modern buildings.

There are several ways to experience this, one of them being going out for a drink or bite to eat at the ‘Plein’ square. The other ways are taking a canal tour or climbing the narrow stairs of the ‘Grote Kerk’. Either way you’ll learn a great deal about the history of The Hague and life in the city, as well as enjoying great views.

City by the beach 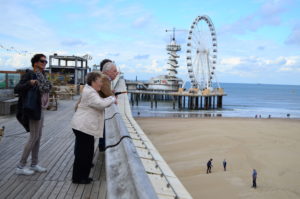 Did you know that The Hague is not only a great city but that you can also enjoy a perfect day at the beach? The Hague has several beaches but Scheveningen is the biggest and most famous one. In 20 minutes a tram will take you from downtown to the sandy beach where you can have a drink, walk on the Pier and go for a swim.

Enjoy the wide and sandy beach with a stroll on the impressive double-layered Pier where you can take a spin in the new ferris wheel and bungee jump or zipline from the bungee tower to the very end of the Pier! Prefer a bit less adrenaline? This is also the perfect place to have a drink or a bite to eat. In fact is kind of a permanent food truck market. The perfect way to spend a day at the beach.

Additional day trips from The Hague

Other options include tours to Amsterdam, Rotterdam, Haarlem, Keukenhof and the Flower Auction, Kinderdijk, Delft, Gouda and Schoonhoven, Leiden, Hoorn and Enkhuizen.

For more information and possibilities please contact us via contact@prgte.com.